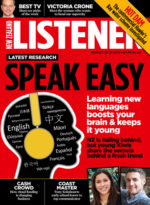 This week’s New Zealand Listener has a great write up about learning languages in NZ. Some quote snippets:

Kiwis are record travellers, but 80% of us speak only one language and that ability is declining, despite evidence that learning to speak in another tongue keeps the brain young…

…in 2014, less than 10% of Year 13 students were studying an international language for NCEA Level Three.

Although English is the world’s third most common language spoke by native speakers, it is recognised as the global language of business, scientific research, media and popular culture. And speakers of other languages often learn English as their second language. The result? Native English speakers…tend to be “spectacularly uninterested in learning other languages”. But from a global perspective, this is unusual. Most of the world’s population speaks more than one language, with many children growing up with or learning at school, up to five languages.

Bilinguals and multilinguals have been found to be better at linguistic abstraction, decision making and…cognitive flexibility – a combination of divergent thinking (creativity) and convergent thinking (problem solving with a number of factors).

…Although younger students find it easier to acquire a native-like accent when learning a new language, even a weekly class for adults can provide some grounding in grammar, language structure and conversational vocabulary.